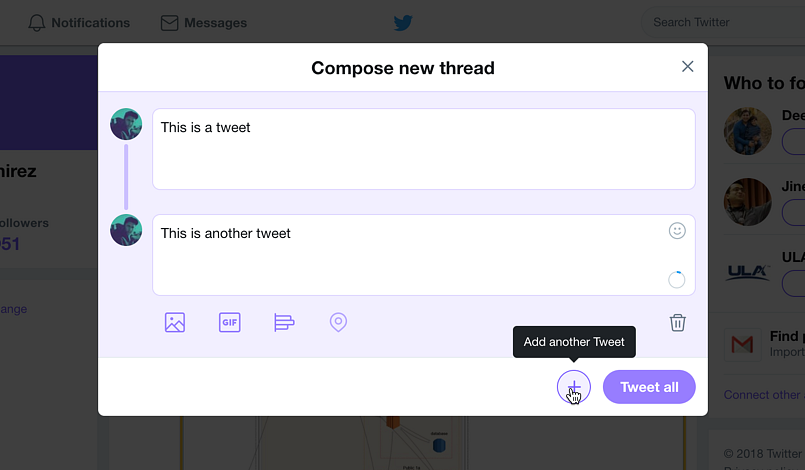 This is a solution found in all Twitter clients. When a Twitter user is composing a tweet, they can either publish it right away or queue it in a series of tweets that can later be posted in a single submission. This behavior is known in the Twitter community as a "Tweetstorm."

When a Twitter user is composing a tweet, they will have two type of submission options after they are finished writing.
The main one is "Tweet," which will automatically publish their tweet.
The second option is "Add another tweet," which allows users to queue up that tweet and a start composing a new one.
A user can keep adding new tweets until they are satisfied with their tweet series. At this point, a user can submit the whole series by clicking the "Tweet all" button.
Their tweet series will then get published as a thread of tweets that can be browsed through a "thread view" or as individual timelined tweets that go one after each other.

In the recent years, Twitter's user growth has stagnated. Many analysts blame this stagnation on the over-complex nature of the service and the lack of apparent value.
By providing features that allow users to enhance and 'supercharge' their usage of the platform, Twitter is hoping to get more engagement with current users and a better runway with new users.

In this case, this feature helps users by adapting to their mind context and allowing them to bypass the constrained nature of the service (character limit). This solution helps them to mimic other engrained behaviors like "texting" and gives the user a path to add tweets in a more relaxed and natural way.
Power users on the other hand get a built-in flow for a behavior that is already established within the Twitter community (Tweetstorms).