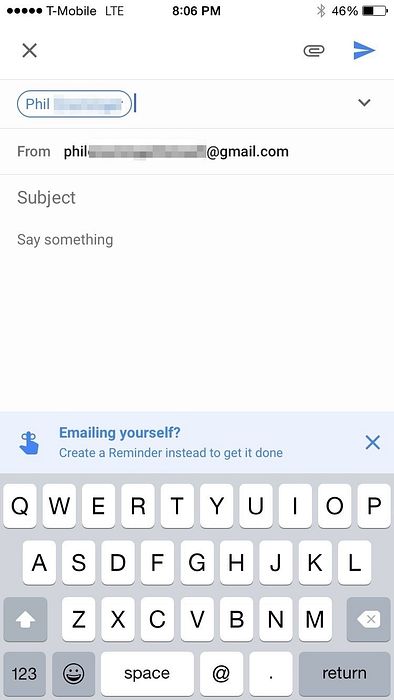 This is a solution found in the Google Inbox mobile app. When users start composing an email directed to themselves, the app shows a snack-bar message explaining to them that they can create a reminder instead of using an email message as a pseudo-reminder system.

Google Inbox is an email client that attempts to consolidate the most common actions and workflows around email. A widely documented behavior related to email inboxes is their usage as informal note taking and reminders tools. People who use email in this way usually compose messages with a note, a reminder, a link, etc., and they send this message to themselves.

This behavior is so familiar that many new tools and services attempt to create more formal products around these ideas. In this case, Google Inbox is an app that provides all the core functionality of a generic email client, but it adds some features like reminders. When Google Inbox users type their email address in the recipient box, the app assumes that they are trying to take a note or capture a reminder for later.

When this happens, Google Inbox triggers a snack-bar dialogue explaining to the user that instead of sending an email they can use the built-in "Reminders" functionality. This "just in time" trigger is a smooth intervention that can help Google Inbox users to learn hidden features and potentially engage more often with the app.

By showing this message at the right time and following a specific separate action, Google Inbox introduces a hard to discover or otherwise ignored feature. If a user engages with this dialogue, it's likely that they will test the functionality and later re-engage again by creating new reminders or acknowledging previous ones. This solution is a smooth discoverability mechanic that can boost the comprehension and overall usage of the app.